Harry Coppell has set a new record of 5.85m at the 2020 Muller British Athletics Championships.

The 24 year old athlete from Wigan cleared 5.85m at the recent Muller British Championships in Manchester. His leap beat the previous best of 5.82m, set in 2012 by Steven Lewis. With no other athlete in the field going beyond 5.20m on the day, all eyes were on the defending champion when he entered the competition at 5.42m, and, just as he did in Birmingham last year, the Wigan athlete rose to the occasion in sensational style.

A first-time clearance of 5.42m ensured the gold medal was once again his, but that was just the start for Coppell with the Championship record he equalled last year and his outdoor lifetime best quickly following with his third-time clearance of 5.72m.

Setting his sights even higher, Coppell went on to break the British record with a stunning final attempt clearance of 5.85m to move to sixth in this year’s world rankings. Earlier this year he also cleared 5.80m to qualify for the Olympics, He has shown that lockdown has not stunted his incredible progress

“An outdoor PB and a British record with 5.85m feels so very special… I don’t think anyone expected it here in Manchester. I warmed up very well and I wanted to save energy, so I was able to skip heights and move on to where I wanted to be.” said Coppell

His leap resulted him not only winning gold but also the the Friday Müller ‘Performance of the Day’ award. 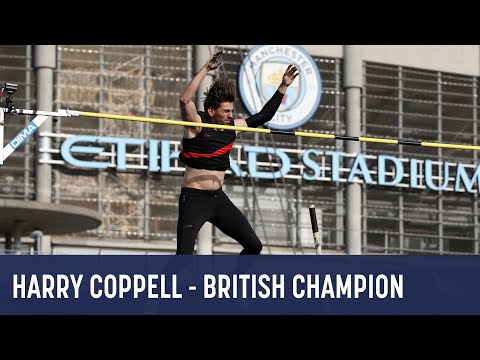